He's Got the Whole World in His Hands: Rockbridge Academy Student Summer Missions 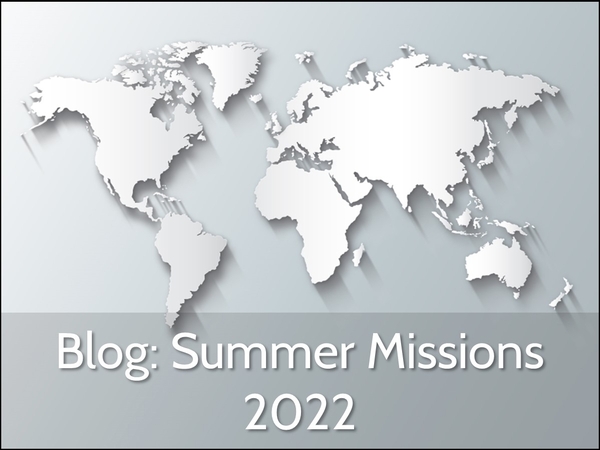 Here at Rockbridge Academy, we highly value service towards others as every human is made in the image of God and loved and valued by Him. As a result, Rockbridge students are continually immersed in service activities, and the summer is no exception. Our students served kids in VBS (vacation Bible school), ran Christian summer camps, helped at medical clinics in Guatemala, taught English in Mexico, and everything in between. From local churches to out-of-state camps to overseas missions, our students have been busy serving God’s people. Here are what a few students have to say about their experience.

Sarah Daly, Class of 2021, served as a camp counselor at Summer’s Best Two Weeks in Pennsylvania. She said, “Working at camp has taught me a lot about how God works despite and even through my weakness. I’ve been confronted with my inability to change campers' hearts and I’ve been forced to trust that He is working while the campers are here and after they leave. It’s hard to spend two weeks loving and ministering to campers and then send them back to sometimes very spiritually dry homes, but I’ve been forced to trust God to bear fruit in their lives. He is faithful and good.”

Working out of state has allowed Sarah to interact with people she doesn’t normally. Sarah said, “I’ve been really encouraged to work with a staff of around 100 college students who come from many different backgrounds but all are united by their love for the Lord. Hearing everyone’s unique testimony had reminded me that God is continually preparing a people for Himself.”

Bailey Lamar, Class of 2024, traveled to a school in Mexico to assist with VBS and English training for high school students. He said, “My missions work showed me how important prayer is for a community. We were teaching English at a school in Mexico and got a chance to hear how the school was founded. A missionary went all around Mexico looking for land to start a Christian school. He found the land he knew would be perfect, and began asking the owner to sell it to him. The owner told him no. For a year he asked, and the owner refused each time. Finally he prayed, telling God that he would ask one last time and praying that this time the owner would say yes. He did. Hearing this story amazed me, because I saw God can use one man's prayers to bring many to Christ.

Being in a different country, Bailey was immersed in a different culture where he met people different from himself. He said, “Working with other teenagers in Mexico really showed me how Christians can be hospitable; they were the nicest people I have ever met. They would always ask us questions and be interested in what we said, and they would always joyfully include us even if it meant they had to speak their second language or carry us in their soccer games. Their hospitality is something I hope all Christians can imitate.”

This past summer after her 11th grade year, Eden Logan, had the opportunity to go to Uganda and lead a children's Bible study camp, help with home visits, and generally spread God's gospel and love. She said, “I have never been more heartbroken and joyful than when in Uganda. I witnessed a ministry that takes despairing, diseased kids and gives them hope and life–both physically and through Christ. The joy I saw there, despite such poverty, inspired me more than ever to work overseas as a medical missionary, and I pray that God will lead me back there!”

Eden also was presented with the opportunity to meet and learn from people very different from her. She said, “I saw a farmer, so poor his house was literally crumbling, worshiping God from the depths of his soul. I realized, even though I could barely understand his words, the Holy Spirit had connected us in our love for the Lord. God’s people are more united than I had ever realized, even across boundaries of language, oceans, and culture.”

God’s people are everywhere, which means you can serve wherever you are. These students have blessed people around the world, some just walking out the front door while others stepping onto an airplane. No matter how different a culture or a people may seem, we all have at least one thing in common: we are all made in the image of God. And, between Christians, there is an unmistakable bond that transcends language and culture. We all serve the same living God and one day we will stand before Him as one people proclaiming His name with one voice. I am thankful for all that our community does to serve and I hope the examples of these students can remind us that all kinds of service is needed and every action done to further God’s kingdom is infinitely valuable.