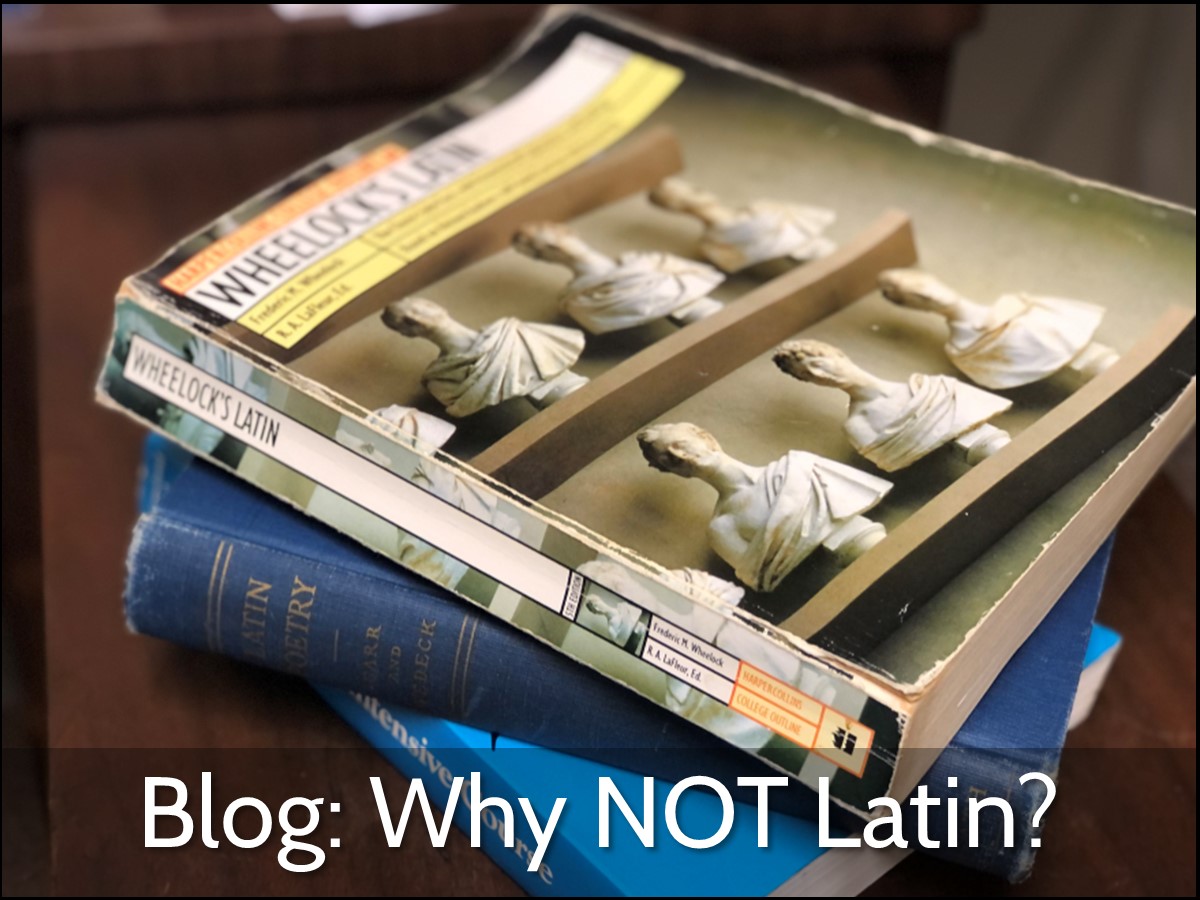 At some point (or multiple points) during the school year, every Latin teacher will be asked the same question. Sometimes we encounter it at parent-teacher conferences, in the classroom, or we are asked to speak on it at back to school nights. We reach for our perfectly scripted and practiced answer that we have used time and time again when asked “why learn Latin?” This answer usually includes a list of 5 - 10 reasons ranging from the connection to English grammar and etymology, the integration with literature, history, and philosophy, and the different levels of practicality for future studies. While all of those reasons are true and valid, the reasons to study and even master Latin are far more significant and rewarding than those already mentioned. Before I go into what they are, let me point out a few things about education in today’s schools.

There is a shift happening in education. This shift is not a new one, but a slow and gradual progression spanning many decades. The progression is a movement away from education for the sake of character and well-roundedness to education for the sake of specializing and salary. The purpose of education in today’s schools is becoming increasingly utilitarian. If subject X does not directly yield a certain dollar figure in the student’s future paycheck or a tangible increase on the SAT, then the benefit of spending time and effort studying subject X is called into question.

I think it is safe to assume that those reading this article find value in the classical model of education. Classical education strives for a balance and unity of a student’s character and their functional intelligence. By equipping students with a multi-faceted and dynamic curriculum, classical education and, especially, Christian education offers students a humble appreciation for the beautiful world around us and the intellectual aptitude to grapple with it from all vantage points. Focusing on the utilitarian benefit of education alone quickly eliminates many studies and practices that have immense benefit to the formation and education of children. I'll give an example.

Most children in America grow up learning an instrument and playing a team sport. The reason for this is not, in most cases, because their parents feel confident that their children will be professional musicians or athletes one day. The reason they are enrolled in these programs is for a less utilitarian, but equally beneficial reason. Those programs equip and train children in skills that they will find rewarding in all areas of life down the road. The skills of teamwork, discipline, attention to detail, leadership, and even humble failure will not only give them greater success academically, but also socially and professionally as well.

In the same way, Latin equips students with equally important skills, not to mention that it unlocks more depth and integration with their other areas of study. Latin encourages the cultivation of indispensable character values as well as more practical, educational skills. Memorizing Latin vocabulary requires discipline and hard work. Understanding Latin grammar and parsing sentences requires logic and deductive reasoning.

Translating original Latin texts requires attention to detail, critical thinking, and the humility to continue to grapple with the text even if you fail the first several times. Going beyond these practical skills, the integration, depth, and richness that Latin offers should not be overlooked.

These values not only benefit the character of each student, but also serve to broaden and deepen their understanding of the world around them. One might ask the question though, “why not spanish or french?” While the study of any language yields immense benefits to students, Latin links us with history, art, philosophy, literature, and theology in ways that no other language can. Consider the following question.

How many parents would be impressed and would deem the education “worth it” if our students could do the following: If they could walk into the halls of Harvard and be able to read the Latin inscriptions of the walls? If they could leave their biology, pre-med, and pre-law classes with a deeper understanding because all the terminology is in a language they already know? If they could travel abroad and pick up the language easily because of their foundation in Latin? If they could read T.S. Eliot with a greater appreciation because they understand the mythological and historical references? If they could hold their own in a political or philosophical discussion because they had not only read, but translated Cicero, Livy, and Caesar? All of these examples to say, how many parents would deem their child’s education successful if their student were practically and philosophically prepared for any area of study or conversation? The utilitarian benefits of a subject have their place, but fall flat when divorced from its connection and integration with the rest of the world. The practical skills that Latin affords students as well as the part it plays in the broader conversation of western heritage make it a seamless and natural addition to the classical curriculum.

When I think about all the skills and richness that my 15+ years of studying Latin has brought to my education, all I can think in response to the question “why Latin?” is “why not Latin?”

Melissa (Caton) Lentz, ‘08, graduated Rockbridge as the first female to attend K-12. After studying English and Latin at Hillsdale College, Mel came back to teach Latin at Rockbridge for two years. She now lives in Dallas, TX with her husband, Jon, her two boys, Jackson and Calvin, and their daughter, Penelope.