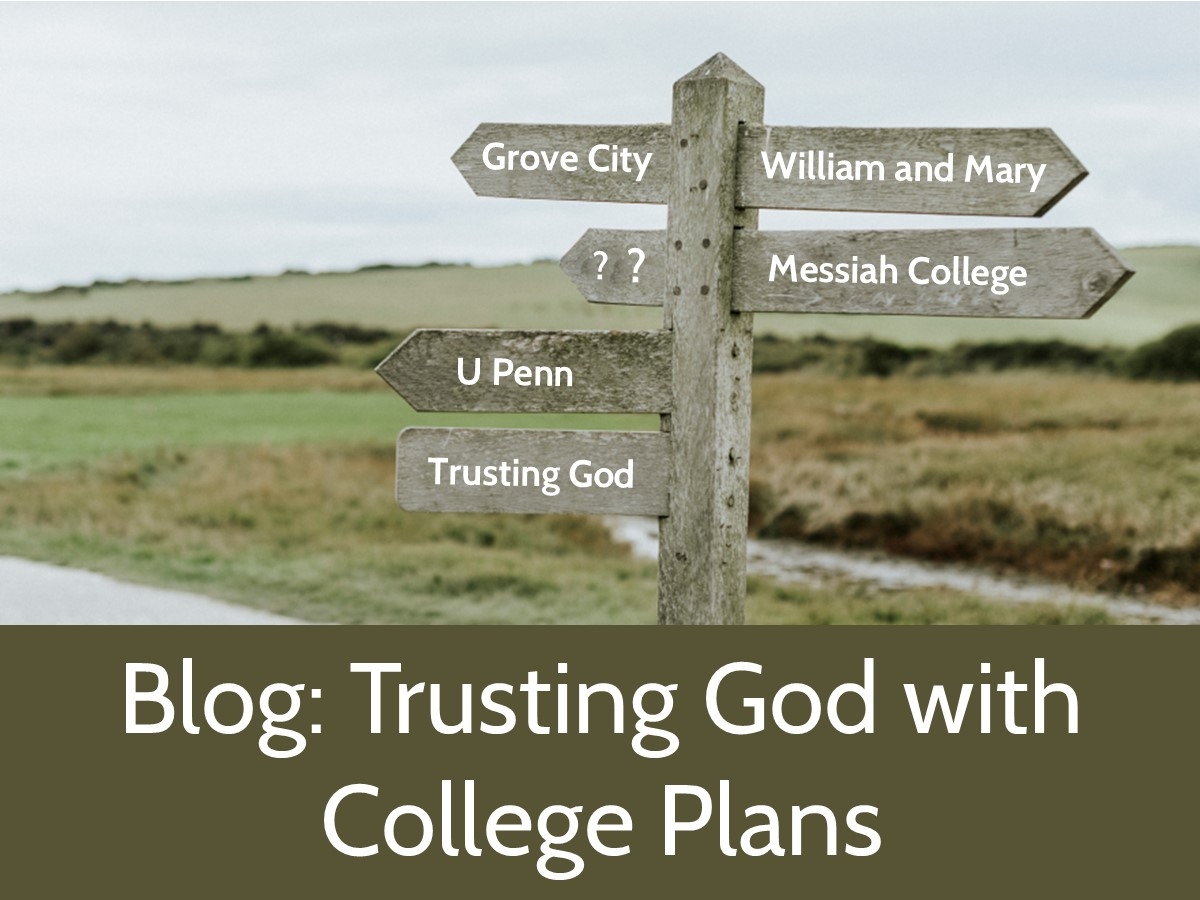 In the fall of 2019, I danced through the halls of Rockbridge with a head held high and a smile secured, for I regarded myself as the early bird who had “gotten the worm.” Before senior year started, I ordered my path for the next season of my life. I applied to the College of William and Mary to study English in W&M’s Joint Degree Programme with the University of St. Andrews; I was accepted and ready to attend before the new year. Even Covid-19, when it came, could not diminish my eagerness for my neatly-crafted plan.

A Zoom bible study early in the pandemic directed my attention to Proverbs 16, particularly verse 9: “The mind of man plans his way, but the Lord directs his steps.” While I nodded along to my peers’ reflections regarding the Lord’s sovereignty despite the virus’s disintegration of man’s plans, my heart stood secure against the truth of the proverb. Blessed, as I was, with rich resources of fellowship and support through my family and the Rockbridge community, I felt little of the pandemic’s mutilation until I left for school.

My first semester revealed not only the virus’s disintegrating effect but also my own pride in planning. By my calculations, if I could only attend a prestigious school, participate in an international program, and do so while achieving good grades and making good connections, I would arrive at a state of accomplished contentment. My efforts, I imagined, would yield happiness.

I completed my supposed prerequisites. Still, my desired result–satisfaction in my work as a student, as well as contentment and spiritual peace in my everyday life–evaded me. When I worked harder, I felt even more discontent.

Upon return after my first semester, the truths I had attempted to scurry away from found me out through various unexpected pathways, such as subbing for my mother’s fifth grade class and working in children’s ministry at my church. Simple truths that I taught to children–including verses like “The Lord is my shepherd: I shall not want” and ideas like “God is in control” and even “Jesus loves me, this I know”–riddled my sense of self-sovereignty.

Over the course of several months, I learned to listen to the Lord as he led me “in paths of righteousness for his name’s sake.” Such listening prodded me to consider that perhaps I, with my perfectly-ordered path towards success, could be mistaken.

Our culture feeds us the notion that mastery over one’s own plans is inherently good. Such self-actualization sates the human hunger to declare oneself “master of my fate, captain of my soul”–a hunger that has been grumbling since Adam and Eve tasted the bitterness of sin. Yet the myth of self-actualization cannot provide sustenance for life or satisfy the soul.

As Augustine wrote in The Confessions, addressing God, “Thou hast formed us for Thyself, and our hearts are restless till they find rest in Thee.” In finding my sustenance and rest in the Lord’s plans rather than my own, I released my schema of prestige and international opportunities and began the process of transferring schools.

Contrary to the notions of our culture, the Lord provided a place for me, as he provides for the birds of the air and the lilies of the field. In the end, I am not, after all, that triumphant early bird with his self-selected worm but a bird fed by my Father.

Submission to the Lord’s rod and staff must not be a singular stance but a daily posture.

C. S. Lewis famously wrote that “relying on God has to begin all over again each day as if nothing had yet been done.” Since transferring to Grove City College last year, I have often reminded myself that submission to the Lord’s rod and staff must not be a singular stance but a daily posture. Surrender, especially of a seemingly-satisfactory schema for success, requires faithful practice, but the Lord has rewarded my surrender, opening further unexpected pathways before me.

The Valley of Vision contains a prayer I often return to during this practice of surrender: “I rejoice to think that all things are at thy disposal, and I love to leave them there. Then prayer turns wholly into praise, and all I can do is to adore and love thee.” May we indeed rejoice as we release our plans into the Father’s hands.

Sarah Soltis (class of 2020) is studying English and classical studies at Grove City College. She writes for GCC's newspaper, The Collegian, and the cultural magazine, Cogitare Magazine. Sarah works as an editorial intern for the online and print magazine Front Porch Republic, and she has contributed to Front Porch Republic, as well as The American Conservative and several online literary magazines. This summer, Sarah will be working at The Trinity Forum, a D.C.-based non-profit focused on cultivating Christian thought on faith and culture.