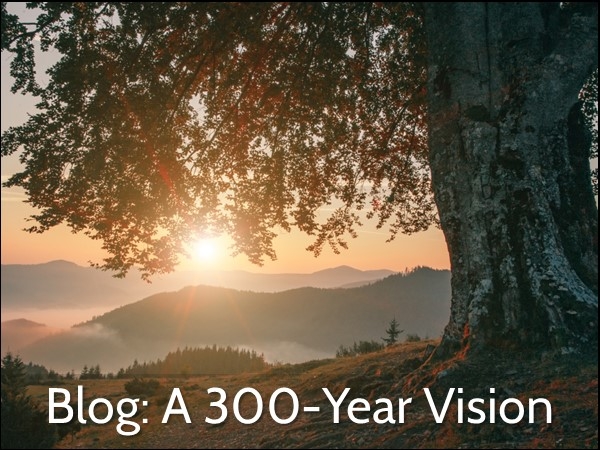 What do you have planned for 2321? Before you answer, make sure your mind hasn’t auto-corrected that number. The question is not, “What have you planned for the year 2021?”, but in fact, “What have you planned for the year 2321?”  The question casts a vision beyond paying off the mortgage, finally taking that trip you’ve been saving for—across the country or around the world, beyond cleaning out the attic (oh, yeah, you did that during COVID), or reading “War and Peace.”

Well, if you don’t have a 300-year plan, the ACCS does. And you are already part of it. The ACCS is the Association of Classical Christian Schools. If your child attends Rockbridge Academy, or any other member school, then your family is part of a generational plan to change and redeem our culture, to restore Christian norms and standards that were once the hallmark of a flourishing society.

I got “on the plan” roughly 20 years ago when my husband and I first discovered classical Christian Education (CCE). When we joined the Rockbridge community in 2002, we heard often of this kind of very long-term thinking. At one school dinner, the story was told by way of illustration, of a group of oak trees planted at Oxford University for the specific purpose of providing new roofing beams in the dining hall centuries hence, when the trees maturity and the roof’s wear would dovetail in this ideal replacement plan. The story is considered myth by some, but even so, the illustration is no less impactful, especially for a community of believers whose God thinks and speaks in just such long terms. God promised to deliver his people out of Egypt after 400 years of slavery, and He sent his son, the savior of the world, into first-century Palestine after a 400 years of silent anticipation. For a God outside of time, centuries and generations take on a different meaning.

Former Rockbridge parent and board chair, Stu Caton, cast a similar vision of time before a group gathered at the Evergreen campus in October 2019 to celebrate the start of Rockbridge Academy’s 25th year. He told the group not to think of this 25th year, but of the 50th year and beyond; not of bringing their children to school, but of driving down Evergreen road to bring, or pickup, or see a history parade with, their grandchildren. Classical and Christian education is always about looking ahead, casting forward, looking to the horizon, expectantly “Look[ing] further up. . . further in” (C.S. Lewis) for the realization of God’s plan.

Which brings us back to the ACCS and your part of the plan. Consider your child[ren] generation one, if you will. Then look ahead two, or three generations. If you are convinced that your children are being uniquely educated to appreciate truth, goodness, and beauty; to think and speak clearly from a biblical worldview, all the while affirming the integration of all creation by God’s making, then you must thrill at the idea of being part of that legacy and seeing the legacy deepen and widen. And that’s why the ACCS exists—to see the growth of CCE and the kind of impact that will ultimately change our world.

If you haven’t visited the ACCS website recently, do it. Maybe you can already easily explain CCE. You did your research and ended up at Rockbridge following thoughtful and thorough decision-making. Even so, a visit to this website will give you renewed encouragement and stimulus about why you are here.

In practical terms, the ACCS is, “The primary public advocate for classical Christian education.” The organization offers, “a wide array of services that help build distinctive schools, [and]. . . provide accountability through accreditation.” In short, “The ACCS seeks to set an educational standard for a unified and directed approach to classical and Christian learning.”

But what makes classical Christian learning such a worthy pursuit? Read on to find out that progressives in the early 20th century set out to deliberately undermine our educational system and its classical Christian heritage. And the plan worked! Fast forward a hundred years and, “The ideas behind classical Christian schools are foreign to modern educators.” That’s because, “progressives worked to remove Christian ideas and purposes from the classroom.” But the ACCS affirms, and by extension, so do you, that CCE’s, “transformative power lies in one truth:  Christ is Lord of all.”

So, “What does that mean for how we live?  How we think about things?  What we value and what we love? In short, education is primarily about what we are trained to love, not just what we are taught to know. Put another way, education is about soul formation, not information. And this formation builds a culture.

To further promote culture-building among ACCS member schools, the ACCS sponsors several contests and awards, including the Blakely Prize in Fine Art and the Chrysostom Oratory Competition. Rockbridge Academy boasts five Blakely and seven Chrysostom winners among its alumni, going back to the inception of these competitions in 2015.  These students reflect not only the excellence of our teachers in instructing and cultivating an expression of truth, goodness, and beauty, but the students’ excellent ability to embrace and express these same virtues. The speeches and artwork are themselves are like redemptive cultural artifacts.

The ACCS does a host of other things, from training and certifying teachers, to cultivating relationships with like-minded businesses and higher educational institutions. They also host an annual conference called Repairing the Ruins, which our school participates in.  The organization tracks and promotes the success of students in member schools, and has developed The ACCS Initiative, an effort designed and being implemented to expand CCE nationally over the next decade. When you do visit the ACCS website, I encourage you to read through the tabs under “About ACCS” and “What We Do.” Your own vision will be refreshed, and you will be encouraged about the real potential for change that you are making possible, through your own child, and generations beyond.