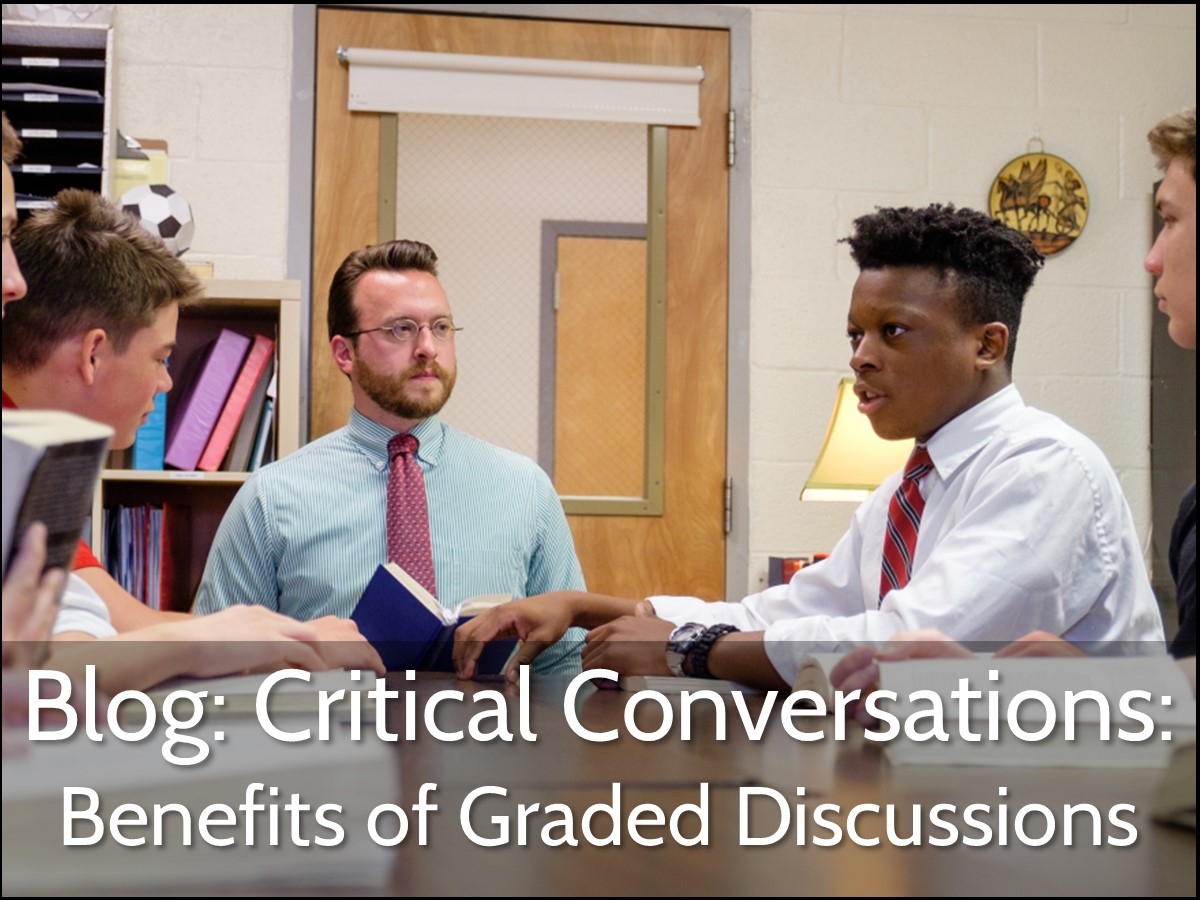 “Graded discussions are a distinction of classical education,” explains class of 2021 alumna Chloe Dubois.  “Most ancient Greek philosophical writings are actually dialogues, and dialogues are a form of discussion.”

The phrase “graded discussion” is a staple in a Rockbridge student’s vocabulary.  Beginning in seventh grade, teachers will dedicate whole class periods to student-led conversations on various topics.  The format of these discussions grows and changes along with the students all the way to senior year.  Most seventh grade discussions are prefaced with a preparatory paragraph and frequently involve teacher guidance, but as the years go on, students gain confidence and independence such that, by the rhetoric stage, many discussions are done with little teacher involvement and often little to no preparation.  However, the basic principle always remains the same:  the students are encouraged to lead the conversation and are given grades based on how often they participate and the content of their participation.  Sounds intimidating, right?  Maybe at first, but I have gathered the genuine opinions and advice of four Rockbridge students who believe otherwise.

Why discussions?  You might be thinking, wouldn’t a lecture from the teacher or reading a scholarly text be a better use of time than listening to a bunch of children talk?  There are certainly plenty of lectures and reading going on at Rockbridge Academy, but there are actually quite a few reasons for and benefits to graded discussions that make them invaluable as well.

Emma Williams, Rockbridge senior, said, “I think they [teachers] want us to discover the truth. But, more importantly, I think they want us to learn how to critically but respectfully and gracefully engage with the ideas of others, especially the ideas we don’t agree with.”

I think they [the teachers] want us to learn how to critically but respectfully and gracefully engage with the ideas of others, especially the ideas we don’t agree with.

Graded discussions build skills that are crucial to interacting with other people and ideas.  Rockbridge freshman Dominic LiVecche said, “I enjoy hearing what other people—especially Christians—have to say about literature, the Bible, and controversial topics.”

Rather than becoming a competition or a time to show off, these discussions are great exercises in teamwork and collaboration.  Ivanna Rhodes, Rockbridge junior, said, “I think they’re good ways to answer difficult questions that are better solved in a group rather than trying to be worked out solely individually.”

These exercises in objective discourse and teamwork make graded discussions great training for experiences later in life.  Chloe said, “when applying for colleges this past year, I had the chance to interview with my future professors. Not only was I able to carry on conversation with adults (something I struggled with before Rockbridge), but I also engaged their questions on a level above most of my peers. I even crafted questions of my own. After one such question, a literature professor furrowed his brow, stroked his chin, and remarked, “That’s the best question I’ve ever been asked.” If not for Rockbridge graded discussions, I would have floundered my way through these conversations. Graded discussions taught me to ask and answer questions in a winsome, thoughtful way.”

If not for Rockbridge graded discussions, I would have floundered my way through these conversations. Graded discussions taught me to ask and answer questions in a winsome, thoughtful way.

Experiencing a few graded discussions at Rockbridge will turn these students’ anecdotes into your own lived experiences.  But just because they are advantageous doesn’t change the fact that they are different and sometimes scary!  If you are a new Rockbridge student, try not to worry.  Symptoms of a good graded discussion include a greater understanding of the material, new found respect for your peers, and boosted confidence in your own thinking and opinions.  Nerves are normal, but they should go away soon.  Emma shared: “I am no longer nervous about discussions because I have realized that it’s not about me and how smart my ideas are but rather about coming to a greater understanding of the truth as a class, and that is freeing!”

Half the battle of graded discussions is the fact that you learn as you make mistakes.  You aren’t going to say all the right things, but no one does!  Emma suggests that you “listen harder than you talk”, and Ivanna encourages students to be bold saying, “don’t be afraid to be different! If you have a genuine answer to the posed graded discussion question that can be supported, speak it even if it’s not the “popular” thing! You can bring a whole new angle others might not have thought of.”  Graded discussions are a distinction of Rockbridge Academy and classical education as a whole because they train us to critically trade ideas in the neverending battle to discover and promote truth.