Not to Be Served, but to Serve—Honoring our Military Families on Veterans Day 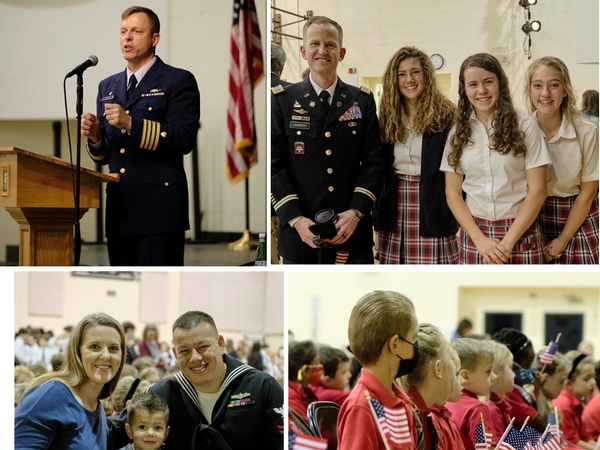 “Remember that you are first and foremost a soldier in Christ’s army…"
Nathan Davenport (2020), Marine Corps

The Rockbridge Academy Veterans Day Ceremony, first held in 2008, arose from a desire to encourage the student body, offer a warm welcome to our neighbors, and honor veterans and active service members in the school and community. The ceremony has changed slightly over the years, but the highlights remain the same: an address by an honored military guest, speeches by student winners of the VFW Patriot's Pen and Voice of Democracy competitions, music from the Rockbridge choir, and a time for students to meet and thank veterans personally.  The ceremony was warmly received from the start, and with the exception of 2020, it has been a cherished Rockbridge tradition ever since.

Rockbridge has always had close ties to those in the military. Currently, more than 40 families in the Rockbridge community have active or retired service members. Several staff have a military background or military spouses, and because of our proximity to the Naval Academy, Ft. Meade, and other defense employers, the school has always drawn families with military affiliations. These service members work in a wide range of fields—naval aviation, cryptologic warfare, music. Many have served for decades all over the country and world, often in extremely challenging conditions.

But our ties go even deeper, to the values reflected beautifully in the lives of our veterans and service members—values we share as a school.

One of those values is “My Life for Yours”: the desire to love others freely and sacrificially, just as Christ came “not to be served, but to serve, and to give His life as a ransom for many” (Mark 10:45). This is something we long to see reflected in the hallways and classrooms of Rockbridge. Kim Williams, who served in the Air Force and Reserves for 23 years and taught at Rockbridge for 11 (ending in 2022), says this verse from Mark was especially meaningful during her time in the military. Just as Jesus came in the flesh to love and sacrifice for His people, a military leader had to be willing to invest in and sacrifice for those she led. Rockbridge service members describe separation from their families and church communities, physical deprivation and danger, and the grave responsibility of protecting life and freedom as some of those sacrifices. For such we are deeply grateful.

Another is acknowledging “Christ as Core”—the reality that all things are integrated under the lordship of Christ, and that in every circumstance, He is working out His sovereign plan for creation. This truth is woven into every subject at Rockbridge and is also a key truth for Christians in the military, especially as they are called to uncertain and sometimes chaotic situations. Rockbridge father Lance Nickerson, Program Manager with the US Army Counterintelligence Command, has served as an active duty member and civilian for over two decades. He says that God’s sovereignty was one of the primary spiritual lessons he gained from his time in the service: no circumstance was accidental, and nothing was beyond God’s control. Army Major Andre Slonopas drew from Ecclesiastes 3:11 as he witnessed the turmoil of Afghanistan: “He has made everything beautiful in its time. He has also set eternity in the human heart; yet no one can fathom what God has done from beginning to end.” Those who serve in the military often experience firsthand the fallenness of our world. Yet as followers of Christ, they trust that He is always at work, redeeming it for His good purposes.

Our alumni are one more link between Rockbridge and the military, and one of the school’s most meaningful reasons for honoring those who serve. Rockbridge graduates have pursued careers in the army, navy, air force, and marines; attended military academies, sought ROTC scholarships, enlisted, and supported military spouses. Today they are cyber security specialists, naval officers, aviators, and students pursuing advanced degrees in service of their country.

Many testify to the ways Rockbridge both inspired and equipped them to serve. Several were influenced by the military leaders they met on staff and among the families at Rockbridge—men and women of integrity and courage. Some found that the academic standards, constant practice in public speaking, and leadership opportunities on the athletic field prepared them well for the rigors of officer training.

Perhaps most importantly, many graduates believe Rockbridge gave them a firm foundation as followers of Christ. “Rockbridge gave me access to the deep wells of Christian truth that would sustain me during difficult times,” writes Navy Lieutenant Daniel Dawson (2012), currently studying at Harvard’s Kennedy School of Government. Private First Class Nathan Davenport (2020), training with the Marine Corps at Camp Lejeune, says Rockbridge taught him to “think critically” and encouraged him to “examine every aspect of life in the light of Scripture and live it to the glory of God”—even when the environment is challenging physically and spiritually.

Rockbridge Academy hopes to continue supporting our military by coming alongside military families, listening to their stories, and equipping future graduates to stand firm in Christ and serve to His glory. We look forward to honoring you this November 11. To those who serve and have served our country, thank you.

Monica Ault serves as the Upper School Administrative Assistant at Rockbridge Academy and has been a Rockbridge parent for 20 years.