Why Do WE Read Hard Books? 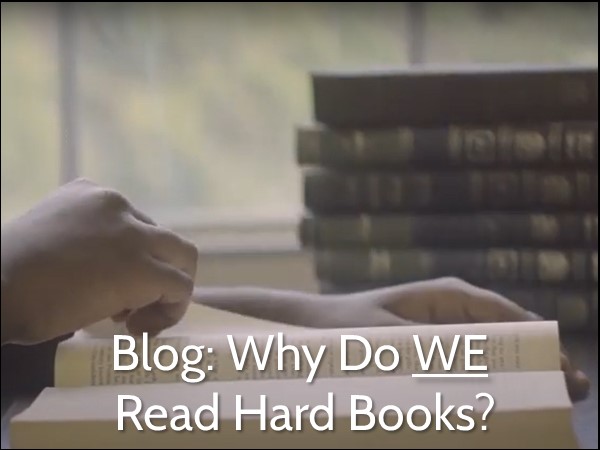 In a previous article, I argued that we should not really have a problem reading hard books. That, “it is hard” is not a fit excuse to avoid it; in fact, the very labor, by strengthening the mind, makes us more fit to read, absorb, and love harder and even greater books, most especially the Word of God.

I wanted to address one other word in the question, though: the word “we.”

Why do we read hard books?

Again, I, too, struggled with Milton, failing three times to get beyond book 2 of the epic. Yet, as I said before, I was largely responsible for pushing to re-introduce Paradise Lost into the freshman curriculum, and that losing the chance to read and re-read that book with Rockbridge students was the great regret of an otherwise wonderful load-lightening which preserved my sanity.

What I did not do was discuss how my attitude changed.

In the summer of 2008, I was blessed to be in my third year at St. John’s College. Each summer, we would choose a preceptorial—a set of readings and discussions that dove deeper into a particular work than the other courses had time to. Paradise Lost was one of the preceptorial options, and my intention was to avoid it, but my colleague Brad Finkbeiner persuaded me to take it with him.

Eight weeks later, I was hooked. What happened?

The classical methodology happened. We would read one book at a time, independently; our only requirement was that we come back to class equipped with a question we had about the text. (That part was not hard; I had lots of those.) Class began by presenting those questions, the best of which became apparent by how well they drove us into discussing the text, flipping back and forth from one page of the poem to another, comparing lines, trying to understand how a nuance, here, shaped the bigger picture. These were not debates—though sometimes if someone was demonstrably wrong a brief debate might flare up—so much as explorations: explorations of something that was great and good and, yes, hard.

Part of my mistake in reading Paradise Lost the first time was simply that I did not have the intellectual equipment to read it alone: I needed a guide, and I needed companions. Our tutor, Mr. May, was a true guide: more than a referee, much, much less than a lecturer. He fostered discussion that focused on Truth of the text and which demanded that we read more and more closely, discuss more and more carefully, listen to the other students around the table with a more gracious but still critical ear.

The “we” of dialectic happened.

It is that revolving pattern–the lone reader puzzling out the text at midnight (rocking my infant son to sleep), then coming together around a table at which we all sat puzzling about Milton—that pattern is the one that made the hard book not less hard, but less heavy.

Many hands make light work. In this case, many eyes made the work light—what had been dark, I could begin to see...

♦ the beautiful intricacies of Milton’s poetics, poetics that weighed each syllable and how it carried his point…

♦ the goodness of characters like the angel Abdiel, adamant, the lone rebel against a rebellious Satan, “Among the faithless, faithful only hee;/ Among innumerable false, unmoved…”

♦ the Truth as Milton—broken, blind, outcast—could see it: that an infinite God of infinite goodness must overwhelm the evil that seems, in the moment, to overwhelm us…

And that has been the delightful pattern of the last four years: four additional passes through Milton with Mrs. Ward and with these students, some of whom have brains that bend to literature with natural ease, some of whom struggle—but we grow and grow strong. The most powerful insights are not solely or even primarily from the so-called “A” students: they have come, consistently, from those students willing to lean in, to try to figure out what Milton means, what his words mean—not just passively sit and hope I will tell them. They are those with the courage to engage, to test something in conversation, and forgive others when we say dumb things… as I often have. And will let me cull out their mistakes, too, because it is the Truth we are after.

We need each other, more than ever. We need the student in the classroom, the teacher puzzling through this, because we want to know the truth, to live out the goodness, to revel in the beauty.

We need each other as we walk through God’s Word, a Word of more genius than any other—and of more difficulty…. And of more worth. We need the body to help us understand this Word, and then to live it—but not alone.

Ultimately, we need Him: the Father, the Son, and the Spirit to, as Milton says,

Illumine, what is low raise and support;

That to the highth of this great Argument

I may assert Eternal Providence,

and justify the ways of God to men.”

We need Him in order to take a simple Gospel woven throughout a hard book and share it with a dying, desperate world.

And that is why we—together—read hard books.

Tags: Christian life, hard books, literature, reading, upper school
Posted in Upper School
Meredith Dunn says:
Thanks for sharing this, Mr. Head! I wish I could have read Paradise Lost with you at Rockbridge!