The Aroma of Christ in Athletics 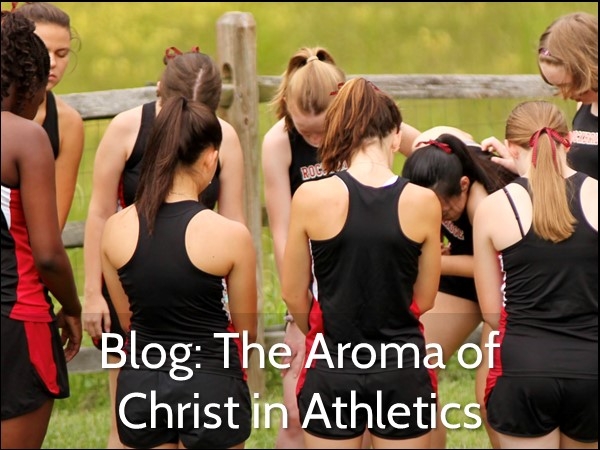 At Rockbridge we confess together that the primary purpose of life is to glorify God. In his first letter to the Corinthian church, Paul instructs the believers: “whatever you do, do all to the glory of God.” As a Rockbridge athlete, the goal remains the same, we strive to glorify the Lord through our sport! As we aim for this high objective we will look, act, talk, and think differently than the world. People will notice. In his second letter to the Corinthian church, Paul writes about Christians being the aroma of Christ:

Rockbridge athletes have a different aroma because of their commitment to the team, because of the unity among teammates and coaches and because their identity is found in Christ. Imagine another team driving onto the Rockbridge campus and crinkling their noses as they sniff a few times asking one another, “Do you smell that?’ ‘What is that?’ ‘It’s different!’ ‘It smells like...Jesus!” As a result, fellow Christians will be encouraged by our conduct while non-believers will be repulsed, frightened, or confused. This opens the opportunity to share “the hope that is in you . . . with gentleness and respect” (1 Peter 3:15).

The Rockbridge athlete will start to smell different because he is fully invested in his team. Commitment is a virtue that is severely lacking in society. People are afraid to commit; many can only half-heartedly commit, or commit only to back out later. The Rockbridge athlete is expected to fully commit to her team for the entire season. That means buying into the coach’s program. Athletes should not question the coaches every time something goes wrong. Athletes should complete the season whether it is fun or not, victorious or not, going as planned or not.

My college wrestling coach said he measured his success as a coach by how many of his former wrestlers were committed to their wives and avoided divorce. At the beginning of each wrestler’s college career, my coach lays out the expectations and asks the wrestler to verbally agree to devote himself to the team for the next 4 years. This method has taught his teams many valuable lessons. Commitment does not change based on feelings; life will be difficult and it requires sacrifice but it is worth it! “Let us not grow weary of doing good, for in due season we will reap, if we do not give up,” as Paul said to the Galatians (6:9). Commitment should not be taken up lightly, but once a person commits, he should stick to it. In one of his parables, Jesus said:

For which of you, desiring to build a tower, does not first sit down and count the cost, whether he has enough to complete it? Otherwise, when he has laid a foundation and is not able to finish, all who see it begin to mock him, saying, ‘This man began to build and was not able to finish’ (Luke 14:28-30).

The Rockbridge athlete will wear the fragrance of Christ by uniting with their teammates and coaches. This is where personal glory quickly fades in importance because the overall success of the team is more satisfying.

The Rockbridge athlete will wear the fragrance of Christ by uniting with their teammates and coaches. This is where personal glory quickly fades in importance because the overall success of the team is more satisfying. Every member of a team has a role to play and every role is vital. In this way, our teams should also help athletes prepare to be good and faithful church members. Paul compares the church to a human body, and we can use that same metaphor for a sports team. Paul writes, “there are many parts, yet one body. The eye cannot say to the hand, ‘I have no need of you,’ nor again the head to the feet, ‘I have no need of you.’ On the contrary, the parts of the body that seem to be weaker are indispensable” (1 Corinthians 12:20-22). The lead scorer, the backup player, and the manager are all working to make the team successful and through their efforts bring glory to God.

Paul continues this metaphor in verse 26, “If one member suffers, all suffer together; if one member is honored, all rejoice together.” I was blessed to witness that verse lived out as a member of my college wrestling team. First is an example of suffering together. In my sophomore year, two of my teammates, Matt and Mike, were both among the top wrestlers in the nation, but they were in the same weight class. That meant that only one could be the starter and wrestle for our team in the conference championships. In wrestling, the starters are decided by a wrestle-off, a match between the teammates where the winner gets the starting position. Matt and Mike had wrestled each other before and they had each beaten each other at different times. I was in the room for the wrestle-off, and it was a tight, well-fought match. Mike was able to pull out a narrow victory. He had just earned his starting spot, but there was no celebration. The room was silent and downcast as everyone on the team--maybe most of all Mike--was hurting along with Matt, his teammate, whose season and hopes of becoming an All-American were now over. A united team suffers together.

We also rejoiced together. During my senior year, I was one of two wrestlers on the team that qualified for the national tournament. In college wrestling, there are ten starting spots and we had about thirty guys total on the team. There were a lot of good wrestlers on the team. A handful of my teammates had even beaten me in matches before, but now their season was over, and I was where they wanted to be. I never felt any tinge of jealousy or resentment from my teammates but instead overwhelming support and pride. There was a large caravan that all traveled from Pennsylvania to Wisconsin to attend the national tournament and cheer us on like crazy, so much so that wrestlers from other teams commented on how loud and enthusiastic our cheering section was. A united team rejoices together.

A Rockbridge athlete will surely have the aroma of Christ when she knows, believes, and trusts that her identity is in the person and work of Christ. This allows the athlete to stop worrying about winning and losing. Rockbridge athletes are able to stay calm when the referee makes a bad call or the other team is not playing fair, and to not fall into despair from a season-ending injury. None of those situations change our value because who we are in Christ is secure no matter what. Galatians 2:20 tells us our identity: “I have been crucified with Christ. It is no longer I who live, but Christ who lives in me. And the life I now live in the flesh I live by faith in the Son of God, who loved me and gave himself for me.”

A Rockbridge athlete will surely have the aroma of Christ when she knows, believes, and trusts that her identity is in the person and work of Christ. This allows the athlete to stop worrying about winning and losing.

Embracing this truth as an athlete was such a relief to me. No matter what happened during a competition, the Lord still looked upon me as his adopted and loved son. God doesn’t think of you less when you lose and does not think of you more when you win. My response was to give my best effort and to praise God for the opportunity. I am not saying that Rockbridge athletes should not care about the results of a competition. The Bible encourages the pursuit of excellence. “Do you not know that in a race all the runners run, but only one receives the prize? So run that you may obtain it” (1 Corinthians 9:24). I am saying that as Christians, we are not defined by the results of a competition. Feel free to work as hard as you can, take risks, and go for gold. You will fail at times but it won’t break you. It just provides an opening to give God more glory.

When Rockbridge athletes are committed, unified, and secure in their identity they will bring glory to the God who gave them the ability to play their sport. We will know we are achieving that goal when the aroma of Christ starts to permeate the campus. Students, parents, and coaches should all be able to smell that a Rockbridge athlete is around, and not only because they have not showered yet.

Tim Stewart is our new Athletics Coordinator and Discover Summer Director. Tim works with athletic teams and coaches, scheduling and coordinating all practices and games as well as overseeing our athletic program. He graduated from Messiah College with a BA Health and Exercise Science.